Showing posts from April, 2009
Show all

April 29, 2009
I had a real long entry in the works cuz Grammy's friend Donna said she wishes I wrote longer posts. Then...my laptop battery died. Now it's all gone. And it's late. So, I would just like to take this opportunity to tell everyone that she can blow bubbles out of a bubble wand and fall down at the end of "Ring Around the Rosy". She also climbs up onto the big boulders in the park and has an amazingly large bladder. So large that her diaper can't last all through the night anymore. I have to change her diaper in the middle of the night or else we wake up in a puddle... We had a great weekend. I'll try re-writing about it tomorrow. Later dudes.
2 comments
Read more 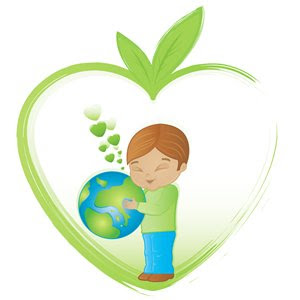 Happy Earth Day! Today is the day to appreciate our (once) beautiful planet and be a little more conscious of what pigs we really are! Everyday is Earth Day at our house. Everyday we: ~ Use cloth diapers ~ Wash all laundry (excluding diapers) in cold water ~ Turn two washing machine loads into one dryer load -- or just scrap the dryer altogether and hang dry ~ Turn off all electricity that we aren't using and unplug electronics that don't need to be plugged in ~ Eat organic, whole foods as much as possible ~ Avoid plastic like the plague ~ Never, ever, ever, ever, ever, ever buy bottled water. Ever. Stupidest waste of money, resources, and good tap water that we already have. Ugh, don't get me started. ~ Don't eat that much meat -- do you know what they do to those poor animals? No thanks ~ Use public transit or walk, a lot ~ Recycle everything. Tip* Put your recycle bin under the sink and the garbage can out of the kitchen -- it's more convenient and
2 comments
Read more

Another Fun Trip To the Mall

April 20, 2009
Her and I had the whole weekend to ourselves -- minus four hours :) You see, I was looking forward to my weekend off all week but was reminded on Friday that her dad worked this weekend = no break for me. Although, I've been having so much fun with her lately that after pouting and feeling sorry for myself, I went straight to planning the best weekend ever. Our plans for swimming fell through as I couldn't have been bothered with trying to dig out my bathing suit. We played outside a lot. It was sunny one day and wet the other. We went to the big giant sandbox, found puddles, and we hit the mall! I love taking her shopping; she is so entertaining. Before we go out I get to dress her up in fun outfits and then actually take the time to do her hair. She's just so darn cute. People ooh and aah over her wherever we go. At the mall, she would point out her shiny shoes to all of these ooh'ers and aah'ers. Being quite the little show off, she would then lean ov
2 comments
Read more

April 15, 2009
How did my jar of olives make it to the front door? Did somebody drop off a jar of olives for me because there is a jar of olives sitting on the table just inside the doorway. No, of course not; that was my toddler's doing. Any parents of toddlers know that it is impossible to open the refrigerator door without a toddler coming out of nowhere, shoving in front of you as though they're fighting for front row at a concert, and grabbing everything they can with their chubby little hands. In all the time it takes you to retrieve the one item you were looking for, remove little person (and chubby hand), and successfully shut the door, they've already snuck off with your jar of olives. When objects do go missing from around the house (such as food from the refrigerator), I always check the play kitchen first. Those cupboard doors are so fun to open and shut, open and shut. Not only that, but cupboards are meant to store things -- teddy bears, half empty cups of milk, shoes
Post a Comment
Read more 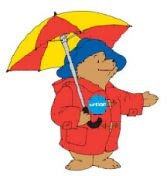 Another rainy day on the coast. We love the rain. OK, maybe we don't love it -- I mean there are many things we love more than rain -- but when it arrives we suit up and head outside anyway. My neighbour is so cute, a little Italian woman who cares for her three grandchildren during the day. When she first saw us frolicking in the rain she was surprised and in her thick accent said, "oh but it's so cold out; you're little one will get sick!" Later on she got used to seeing us outside during a torrential downpour and would say, "wow, you're little one really loves the rain!" I don't think it phases her anymore as now she'll open the door, poke her head out and simply say, "you're crazy!" Rainy days can be lonely but they have their perks. Little One gets all the puddles to herself. The slide is extra slippery on rainy days. I get to use my umbrella... Umbrellas make me think of Paddington Bear or Mary Poppins. There's somet
Post a Comment
Read more

April 04, 2009
I have just started providing childcare, fulltime, for another little toddler this past week. Little One has adjusted quite well to having another whipper-snapper in the house. I, on the other hand, am exhausted. I was originally going to take in two children (as that is how many I can take in without needing to licence my home). What was I thinking? One is enough! In one week, she has already learned, and grown, so much! First of all, she has begun to learn how to stand up for herself. This is a new concept for her as she's been around adults all her life. As far as I know, no adults in her life yank toys out of her hands or bonk her on her head with really hard toys. When something she's playing with does suddenly get taken from her, she'll often just stand there confused. She'll look at him, then at me, and back to him again. Sometimes she'll go after him and kind of "ask" for the toy (hold out her hand and say, "uh?") Other times
Post a Comment
Read more
More posts