Ontario is under Martial law... Well, pretty  much. I don't think anyone will get shot by police but they can't leave their houses except for medical reasons.

There is a massive plume of smoke outside. We walked down to see which house it was. Looked like it was one neighbourhood over. It's not. It's actually 16 blocks away. There is an apartment complex on fire. Nobody lives in it yet. It is just being built. I'm okay if they leave it as ash and replant the trees that were there a year ago.

I liked the crowd at the lake today. The early spring crowd. We were there in our layers with snow on the mountain just above the lake and a cold wind keeping us centred.

The news is silent today; the way it always is when there is something going on.  It's just covid numbers and pushing a vaccine. They announced my age group today. I'm supposed to be excited. People seem excited and they tell me like they want me to join their excitement.  I don't really know what to say so I say nothing.

She is finishing the corset she is sewing. Amazing! We are low tech here. Sewing machines are great gadgets to play with. I have a reputation with her friends and classmates too. Four hours at the beach today and I saw those stupid phones get picked up for about ten minutes only -- on the car ride home. So proud of those teens. They had a good time.

That's just the parts of the day I can share. You know we are going to get a blackout, right? Martial Law and no internet. Just get a landline. And a sewing machine too.

Popular posts from this blog

The Hundred Languages Of Children - A Poem

May 30, 2008
My, my, my it's been a late night with her. So, I'm just going to post a poem - my favorite poem. I always get a bit of a lump in my throat when I read it. The poem, "The Hundred Languages of Children" was written by Loris Malaguzzi, founder of the 'Reggio Emilia' approach to childcare. My brain is too mushy tonight to explain this approach well enough but, I've found a site that explains it fabulously: http://en.wikipedia.org/wiki/Reggio_Emilia_approach I had the opportunity to work with an educator who was learning about this approach and practising it in her classroom. It was the most amazing experience I've ever had working in childcare. The children were so stimulated, curious - they were little scientists! Our role as teachers was basically that of facilitator. We observed, recorded, and documented their play and provided whatever it was they needed to take it a step further. Projects could go from a few days to over a month. It is absolutely
Read more 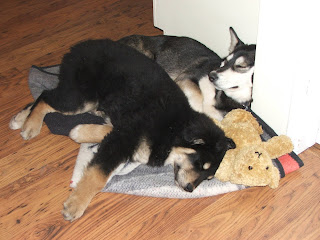 I've never had a doubt in my mind that I'd be a stay-at-home mom with lots and lots of kids (four to be exact). However, at some point on my journey through life, I became a single mamma -- and it's been really, really crappy. But, with a little creativity, a lot of stress, and a few doses of extreme poverty, I have still managed to balance work, school and being a stay-at-home mom to my now two year old. Where I originally thought providing childcare from home was the obvious solution, I was wrong. It was isolating, my house was always messy, and let's face it -- childcare pays pennies. Not only was I too educated to be sleeping on an air mattress, but I had also turned into Angry Mamma and my days had become so stressful that I was going to soon end up as a headline in the news... The moment I realized this, I had decided on a new career, met with a top notch school, and gave my family notice -- all within a 48 hour period. I am happy to say that I am now in my seco
Read more

Remember Bestie Who Just Moved Away? They Are on Evacuation Alert...

August 20, 2020
Just a few short weeks ago, her bestie moved out of town . We are planning on seeing them on our road trip this coming week. Our plans have shifted somewhat. Her bestie is amidst the wildfires and they are on evacuation alert There was a lot of chit-chatting on the phone this week with constant updates of where the smoke was. At one point she announced, "uh, when I look up, the smoke is right above our house." The space I had picked out for camping is under evacuation alert, it also has a little red dot beside it on the government's fire map page. A little red dot means a little new fire has popped up... I guess I'm not sleeping there. I'm going to wait until Saturday to figure things out. We 'rents agree that getting the kids together is super important now. We may swing through and take bestie and bestie's little sis to a lake outside of town for some retreat and some major catching up. In the next town, and the plan for the rest of the week (air quality
Read more